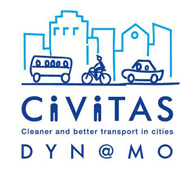 CIVITAS DYN@MO is a project carried out under FP7 – 7th Framework Programme of the European Union. It financed research and development in terms of competitiveness of the local economy based on practical use of the latest scientific knowledge.

It focuses on the development of the most effective measures of traffic sustainability based on electro mobility and planning for sustainable urban transport, and is approved as part of the CIVITAS initiative of the cycle CIVITAS Plus II (2012-2015). The project is implemented in four cities: Aachen, Palma de Mallorca, Gdynia and Koprivnica. The project is worth around 13.1 million euros, with a contribution of the European Union of EUR 8.5 million.
Komunalac LLC is participating in the project as a partner of the City of Koprivnica, with a budget of 291,840.00 HRK. Besides Komunalac local partners are Campus Ltd., Development Agency North DAN, Čazmatrans New Ltd. and Croatian Railways Infrastructure. Implementation of the project in Koprivnica includes 6 measures (Planning public transport, Plan for sustainable urban transport, University Campus zero CO2 emissions, Public transport with low emissions, Curriculum development of sustainable transport for Koprivnica university and program sharing electric city car). GKP Komunalac as a partner participates in the measure 2.1. Program sharing of electric city cars.

Car and bike-sharing schemes in the City of Koprivnica

For quite some time it has been obvious that there is a need for a more efficient use of the municipality’s car fleet and that of other public institutions and businesses. The decision-makers were convinced that the efficient use of electric vehicles, organised in a car-sharing scheme would prove to be the most cost-effective solution. The procurement of five electric vehicles, one hybrid and one plug-in hybrid vehicle by the municipality attracted a ot of media attention since it was a national premium. As part of the national electricity provider’s HEP electromo-bility programme (HEP ELEN), a contract for the setting up of five fast electric charging points was signed in the City of Koprivnica to enable the use of this first electro-mobility fleet. As part of the mobility programme of the National fund for Environmental Protection and Energy, a subsidy for the procurement of the vehicles was provided. Employees that had the wish to participate in the e-car sharing scheme were trained first. As the number of trained employees increased, the e-cars were used more efficiently. In the meantime, the car-sharing scheme was being developed; Komunalac LLC was included in sharing-schemes and our employees uses two electric vehicles. The use of the system is still in its experimental phase, but the cost-effectiveness is improving with the rising number of users and the vehicles are being used throughout the working day. In addition, the first cost savings on fuel have been recorded, even in the colder winter months.

In 2014 a sustaining bike-sharing system was implemented in both Koprivnica (Croatia) and Heviz (Hungary) as a result of a cross-border cooperation project (IPA CBC Hungary-Croatia). BicKo system is a first public bicycle sharing system in the city of Koprivnica. The system comprised 60 bicycles, 7 docking stations with IT surveillance systems and publicly available GIS maps for tourists. The system is maintained by the Municipal Utility Company Komunalac, which uses a transport and maintenance vehicle to transfer the bikes among the docking stations. As part of the CIVITAS DYN@MO project the system was recently upgraded by 10 additional pedelec bicycles and one extra docking station at the university campus. The system is fully compatible with the existing conventional bike’s rental system and uses the same docking stations. Both the conventional and pedelec-sharing system are part of the intermodal public transport scheme of the City, currently developed in the CIVITAS DYN@MO project. The bike-rental scheme has over 1000 registered users and is free of charge.

BusKo – electrical minibus
City of Koprivnica, in cooperation with the Association Civitas Dyn@mo, started a great alternative for the transportation of citizens. The first minibus started its work on Friday, 23 October in the afternoon. Electric buses are the first example of public transportation zero emissions in Croatia. The project aims to develop a sustainable and energy efficient urban mobility with a focus on electromobility. Electric buses have been introduced as part of measures 2.2 K. Public transport CO2 emissions. The public transport system of zero emissions will be integrated with the capabilities of the regional public transport and is the first such system in cities of similar size in the region.

We are using cookies to give you the best experience on our website. By continuing to use this site you consent to the use of cookies.

This website uses cookies so that we can provide you with the best user experience possible. Cookie information is stored in your browser and performs functions such as recognising you when you return to our website and helping our team to understand which sections of the website you find most interesting and useful.

You can adjust all of your cookie settings by navigating the tabs on the left hand side.

Strictly Necessary Cookie should be enabled at all times so that we can save your preferences for cookie settings.

If you disable this cookie, we will not be able to save your preferences. This means that every time you visit this website you will need to enable or disable cookies again.